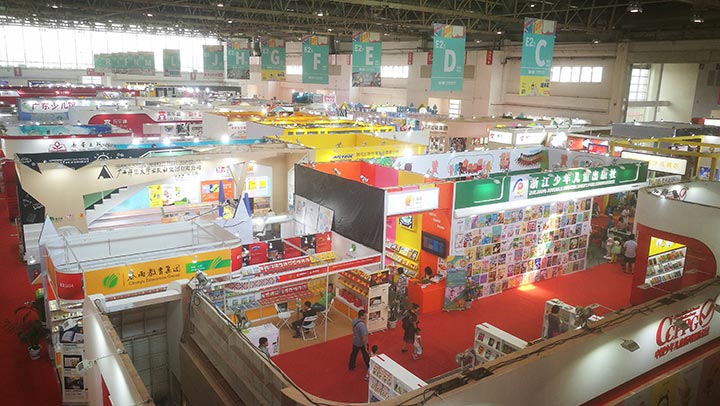 This year, the Beijing International Book Fair-the world's second-biggest such event after Frankfurt-will have an exhibition area of 97,700 square meters, the largest in its history, Mei Jia reports.

The capital's book lovers are in for a treat once again as the city prepares for the 25th Beijing International Book Fair from Aug 22 to 26. And the organizers are going all out to ensure its success with the integration of the publishing sector with the cultural and the technological spheres.

"Besides the new features this year, we are also looking at the fair to boost international exchanges as well as to ensure that Chinese publishing goes global," says Lin Liying, deputy general manager of the China National Publications Import & Export (Group) Corp, which is also part of the fair's organizing committee.

The 16th Beijing International Book Festival will also be part of the fair for the fourth time. And the festival will showcase Beijing's culture through its publications, according to Wang Yefei from the Beijing municipal bureau of press, publication, film, radio and television.

This year, the Beijing fair-the world's second-biggest such event after Frankfurt-will have an exhibition area of 97,700 square meters, the largest in its history. And the fair's eight exhibition halls will host a total of 2,500 publishing organizations from 93 countries and regions, including 1,520 from overseas.

Four countries and regions will join the Beijing book fair for the first time.

The Kingdom of Morocco is the guest of honor at this year's fair. Said Kasmi, the counselor at its Chinese embassy, says Moroccan publishers and cultural organizations will bring 800 titles to Beijing.

Morocco will hold three talks during the fair to explain Moroccan literature and culture; discuss translations of Chinese works; and shine a spotlight on Sino-Moroccan relations with regard to the Belt and Road Initiative. A Moroccan trio will showcase Al Andalous, a type of music passed down from the 12th century.

"Many Moroccans know about Confucius and Sun Zi, and their thoughts, but we would like to enhance exchanges," Kasmi says.

Writers from the United Kingdom, Spain, Russia and Poland will attend the event.

Fifty Sinologists, translators and experts in China studies will take part in writers' events and publisher-agency meetings, including a roundtable with writer Yu Hua.

Lin says the aim of the exchanges is to enhance understanding about China and promote more publishing links so that more Chinese titles gain global appeal.

"We will also offer orientations on Chinese publishing to newcomers, and pick 10 international copyright managers or literary agents, selected from 100 candidates globally, as publishing fellows," she says.

The State Administration of Press, Publication, Radio, Film and Television's latest report on the country's press-and-publication sector, released earlier this month, says that China sold 13,816 copyrights to overseas buyers in 2017, an increase of 24.1 percent compared with 2016. "It is a big stride," says an official with the administration, who was quoted by a newspaper affiliated with the administration.

Most of the copyrights were sold to mainstream Western markets, as well as countries involved with the Belt and Road Initiative.

The report says that works which accounted for more than 1 million copies each in 2017 comprised 17 categorized as Party/leadership/political thoughts, seven from literature and 18 children's works.

Lin says: "Children's publishing is a growing sector. And one sees a deeper involvement with technology, like cloud services, artificial intelligence, augmented reality and virtual reality.

"Also, there are now various platforms and ways to read digitally. And there is a call for better reading experiences, like better bookstores."

Asked about the industry's response to the trends, she says: "The fair offers its answers and reactions."

The event's eight halls have been redesigned. There will be more space for children's sectors, and technology/education companies are offering book-related services and creative cultural products.

"A book is a gateway to infinite possibilities. We want visitors to experience them and to interact," says Lin.

A cafe will serve literary masterpiece-related drinks and cakes to go with the writers' events. And you can even meet British author Rachel Joyce at one of the fair's venues, besides attending more than 30 literary talks.

Even underprivileged children have something to look forward to at the fair. Writer Liu Zhenyun, the "reading ambassador" at the event, is hosting a special summer camp for 16 kids from Fujian province's Chuxi village.

"I spent five days last year in the village, teaching them writing and reading. And I'm going to keep my promise of bringing them to see Beijing and a book fair," says Liu.

Typically, the fair runs from 9 am to 5 pm but, this year, the hours have been extended to 6 pm.

9 am-6 pm (Aug 22-25); 9 am-3 pm (Aug 26). The main site of the book fair will be at the China International Exhibition Center in Shunyi district of Beijing. There will be some offsite events in the city. Check its official website for more information: www.bibf.net.